Here are some background information on the technology of these synthetic voices:

Guelfenburg has been working since 1986 on the musical aspects of text-to-speech systems (systems for the production of artificial speech).

The large interest in synthetic voices and language lead to the development of Robovox*, a MIDI controllable voice synthesizer. It can be played with a MIDI keyboard (or a sequencer) in addition of a phonetic MIDI keyboard (or a sequencer). This prototype (see the photo on the right) can sing syllables interactively, but playing it is very complex. Creating a sung verse takes several days. The challenge is to get a smooth sequence of syllables.

The Robovox prototype consists of two separate MIDI interfaces (Heavily modified Doepfer MCV-1). The upper interface controls the syllables which are stored in the voice chip (it is installed in a small daughter board). The lower interface controls the clock of the oscillator and therefore varies the pitch of the voice. When producing a song two separated tracks in the MIDI sequencer are used to play Robovox. The first track plays the melody and the second track controls the syllables.

In the beginning Robovox was able to play it´s voice with a fixed frequency only. After recording the voice an Eventide H-3000 Ultra-Harmonizer or a Roland Vocoder were used to get the voice to it´s correct pitch. Interesting is the fact that the Eventide was the only available harmonizer which worked properly with artificial speech. All other harmonizers produced annoying artefacts, which you can hear in sound clip no.1 (Data Dreamings).

For creating artificial voice various special TTS-chips (Text to Speech) were used. These electronic chips produce artificial speech depending on the binary code, which feeds the chip. Several text blocks give the impression of a spoken text. In Robovox three different chip types were used: The SPO-256, the Votrax SC-01 and the Votrax SC-02. You can hear the SPO-256 in the beginning of "Being Boiled", which is on the second album "Eloquence". This chip has a very cool and metallic voice. It sounds similar to the SAM software on the Commodore C-64 computer. The Votrax-chips sound softer and more "comfortable". You can hear them on "Virtual Reality" on "Eloquence", too. 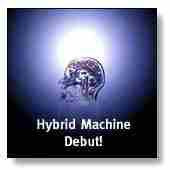 The first album is always a Debut!

Hybrid Machine´s first CD - Debut! - contains "conventional" synthesizer music. Although the hardware of Robovox was finished the operation of the prototype was not optimal. In Debut! Robovoxwas used several times, but only as an effect and not as a singing voice. 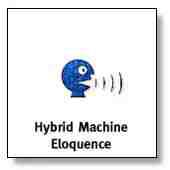 Eloquence is the second album and Robovox sings

It took another two years to finish the "Robovox" prototype and it was used heavily to produce this conceptional album. The combination of synthetic voices, digital harmonizers, analogue vocoders and various effect units lead to the two virtual pop singers "Arthur Artificial" and "Sindy Synthetico".

Eloquence contains 11 tracks, the album always seems to be entertainingly, interesting and humorous, although it has some social critical thoughts. E.g. the track "Kronado de maschino" - sung in the artificial language "Esperanto" - warns of the perfect machine which can take control over men. In "Data Dreaming" Arthur sings that robots have feelings, too. There are also two cover versions. Kraftwerks hit "The model" and Human League´s "Being Boiled". Both versions sound very modern and are sung by Arthur Artifical, the virtual male singer.

Eloquence got some rewards, e.g 1999 the "German award of contemporary music".

Robovox is still a prototype for creating artificial singing voices. Robovox won´t be sold nor rented out. These voices are exclusively a property of the project "Hybrid Machine".

* Approximately at the same time Florian Schneider von Esleben and Gert Jalass developed a similar system and gave it the same name "Robovox". Alexander Guelfenburg declares that neither Schneider nor he copied the concept or the name of "Robovox" from each other.

© 2003-2021 Alexander Guelfenburg, Virtual Music e.U. – Vintage synthesizer repair service. Application of service hints and usage of products at your own risk. Changes without notice. With the use of this web page you accept our General Business Terms. Legal Disclosure | Data Privacy Statement | Coding: Gernot Ebenlechner